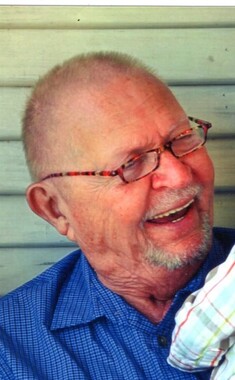 Back to Richard's story

Richard Earl Burnham "Dick" was born on Nov. 13, 1942 in Manahawkin, New Jersey but called Kerens, Texas his home for the last two decades.
After a battle with Pancreatic cancer, surrounded by loved ones at his home in Kerens, he went to be with his Lord and Savior on the morning of Oct. 9, 2019.
Richard is survived by his loving wife of 36 years, Beverly Burnham; his five children, Jason Burnham, Shannon Montero and husband, Melanie Bolin and husband, Ronald Franklin and wife and Rebecca Franklin; grandchildren Stephanie Avery and husband James Avery, Sarah Fredrick-Rogers and husband Jeremy Fredrick-Rogers, Andrew Nitchman and wife Lauren Nitchman, Cameron, Will, Abbie, Ragan, Mason, Daisy, Ryan, Brandon, and Kelsey. In addition to his grandchildren, he had nine great-grandchildren whom he loved very dearly. He is also survived by his sister-in-law Sheryl Allred and husband Jimmy Allred, their two children and spouses and their children - Jarod Allred and wife April Allred and two children and Whitnee Fenwick and husband J.J. Fenwick and their son. He is survived by his loving niece Linda Musmecci and her husband Gary of Midlothian, Texas as well as their daughter Gina and husband Luis. He is survived by several other family members and friends, including his very dear friend Gene Bullard and his wife Bobbie Bullard.
He is preceded in death by his father William Burnham, his mother Louise Burnham, his sisters and brother and his son Kevin Franklin.
Richard graduated from Southern Regional High School in New Jersey in 1960. He served in the United States Air Force and attended the Dallas Institute of Mortuary Science in 1967. Up until a few months before his death, he was still working as a funeral director; a job which he dearly loved. During his time in the Civil Service, he was able to travel to different parts of the world, including Greece and Spain. He loved cooking and fishing. He fulfilled his dream to live by the lake with his wife. Most days you could find him sitting on the bank with a fishing pole in hand or fishing from his boat. He loved when people would give him hogs after hog hunting. He would usually dress the hog then deliver the meat to those in need around town. He truly loved to know he was able to help people and would do so whenever the occasion would arise. Even if he had nothing to give, he would find a way to help those in need - even if it was just a place to sleep for the night and a hot meal. He would wave at anyone he passed by. Anyone he met was an instant friend. He loved to make people laugh. He was known to be blunt and honest but he truly and dearly loved his family and friends.
At the request of Richard, he has been cremated. His family is holding a celebration of life which will be announced at a later date. In lieu of flowers, Richard loved animals so donations can be made to ASPCA in his honor or any charity of choice.
We will miss you forever. We will never forget your beautiful, kind blue eyes, your contagious laugh, or your giving heart. "I have fought the good fight. I have finished the race. I have kept the faith. Henceforth there is laid up for me the crown of righteousness, which the Lord, the righteous judge, will award to me on that day, and not only to me but also to all who have loved his appearing." 2 Timothy 4:7-8
Fly high our Angel, until we see you again
Published on October 11, 2019
To plant a tree in memory of Richard Burnham, please visit Tribute Store.

Plant a tree in memory
of Richard

A place to share condolences and memories.
The guestbook expires on January 09, 2020.

Restore the guestbook to view the 1 more posts by family and friends, and share a memory or message of condolence of your own.