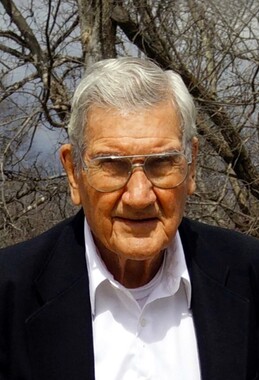 Back to John's story

John Woinder Kenner was born April 12, 1927 to Fitz and Lorena Christian Kenner in their Christian home in Powell. He died on Dec. 3, 2019 at the age of 92 at the Kenner "home place" in Powell.
John graduated from Powell High School in 1945. While in high school, John played basketball and baseball and enjoyed many successes and titles. After graduating high school, he was drafted into the Army, and at the conclusion of WWII, served in occupied Berlin, Germany. Upon discharge from the Army, John returned to Powell and the old family home place where he subsequently worked in the oil field with childhood friends and teammates Oscar Chrisman, Kenneth Ray, and Homer Wasson. He and his brother, Gerry Kenner helped his father Fitz run the Powell cotton gin.
Like many veterans in the Navarro County area, John enrolled in the newly established Navarro Junior College. At the time, the college was located in the old air field barracks where he met Mudge and became part of the infamous "Barracks Bunch" of NJC. After a respectable courtship, John and Mudge were married on March 17, 1950 in Winnfield, Louisiana.
While at Navarro, John played on the NJC basketball team and was recognized as the most valuable player in 1948 and 1949. After attending NJC, John was offered basketball scholarships to Baylor University, Texas A&M University and East Texas State University. John chose to continue his basketball career and education at ETSU, and he and Mudge moved to Commerce where he played on the basketball team and earned his Bachelor's degree in 1951.
During John's 35 year professional career, he taught and coached at schools that included West Delta, Sonora, Pecos, both University and Midway High Schools in Waco, and finally at Kerens ISD. During his coaching tenure, he led teams to many titles-- including a State basketball championship in 1956!
John was a Christian, an athlete, coach, teacher, hunter, volunteer, and lifelong learner. He was obsessive about his health and conditioning, still working out at Lott's Fitness Center five days a week even after his diagnosis with cancer. John exercised his soul as well as his body. He was a devoted Elder at the South Waco Church of Christ in Waco and served as Elder at the Kerens Church of Christ in Kerens for over 40 years. As a leader in the church, he taught many Bible classes, led singing, and preached. As a lifelong learner, John was an ardent student of the Bible, a dedicated reader of many subjects including bird dog training, history, politics, religious commentaries, and histories of old gospel hymns.
After returning to Navarro County in 1974, and enjoying semi-retirement, John became a Track Official for many track meets held across the state. Eventually, he became a State Track Official for the State meets in Austin, ultimately receiving an award for 25 years of continued service.
Never one to be idle, John volunteered in the community and served on numerous boards after retirement. Helping to establish the Board of the Chatfield Water Supply Company, he sat for many years to lead and maintain its service to much of eastern Navarro County. Upon retiring from public education and teaching, John started guide hunting at Upland Bird Company in Eureka. He and his boyhood friend, Oscar Chrisman, trained bird dogs as a "side" to their guide hunting. John trained dogs up until 2018 when he and his daughter, Pat, completed a course and became certified Therapy Dog Handlers. John enjoyed taking the therapy dog, "Cayd," with him on his many visits to shut-ins at the nursing homes around the area.
John was known across the state, in his community, and church for his honesty, character, integrity, sportsmanship, and his generous Christ-like spirit. He will be sorely missed by his family, players, students, and friends.
He is preceded in death by his parents, Fitz and Lorena, aunts, Thyra Emerson, and Katherine Kenner, and one brother, Gerry Kenner of Palestine. John's mother, Lorena Christian Kenner, was killed in a train accident when John was five years old. He and his brother Gerry were raised on the family Home Place in Powell by their father, Fitz and two of Fitz's sisters, Aunt Thyra and Aunt Katherine.
He is survived by his wife of 69 years, Helen "Mudge" Matthews Kenner, of Shreveport Louisiana; two daughters, Lorena "Reney" Christian and her husband Mike of Huntsville and Pat Harper and her husband Robert of Corsicana. He was blessed with seven grandchildren, Paula Belcher of Milton, Florida, Toni Pierce of Boswell, Oklahoma, Matthew Christian of Chesapeake, Virginia, Shelley Riddler of Huntsville, Texas, Trey Harper of Everett, Washington, Lea Ellen Harper of Houston, Texas and Audra Tekell of Niceville, Florida; he also had numerous great grandchildren. John loved his nieces and nephews, Candis Wells and Chris Kenner, both of Palestine, and Kathy Jo Commiato of Kerens. John had six first cousins, two of whom survive him; Paul Kenner of Powell, and Tommy Kenner of Tyler.
Visitation will be held from 2 to 3 p.m. Friday, Dec. 6, 2019 at Corley Funeral Home. Funeral services will follow the visitation at 3 p.m. at Corley Funeral Home Chapel with Mr. Jimmy Glenn officiating. Burial will follow at Oakwood cemetery.
Serving as pallbearers will be John V. Kenner, Andrew Kenner, Chris Kenner, Robert Harper, Major John Paul Tekell, John Jackson, Matthew Christian, and Cayd. Honorary pallbearers are Paul Kenner, Tommy Kenner, Norman Smith, Jerrell Schultz, Floyd Young, and James Williams. Memorial pallbearers are Gerry Kenner, Hugh Allen Kenner, Homer Wasson, Kenneth Ray, Oscar Chrisman, and Howard Jackson.
Memorial gifts may be made to the Kerens Church of Christ at 105 SW 3rd. Street, Kerens, Texas 75144.
An online guestbook is available at www.corleyfuneralhome.com and selecting the John W. Kenner obituary.
Published on December 5, 2019
To plant a tree in memory of John Kenner, please visit Tribute Store.

Plant a tree in memory
of John

A place to share condolences and memories.
The guestbook expires on March 04, 2020.

Robert hinson
My coach in 1957 at Pecos . We went to
State and came in second. I will never
Forget him or that year.
Kim Latta and June Latta
So sorry about John. Would love to be their for visitation and funeral but have a Dr. appointment in Dallas I have already canceled once. I Love You and wish you Prayers and so much Sympathy. Would love to be there to hug you once again.
My Love for You and the Family,
Kim Latta 🙏❤️
View all