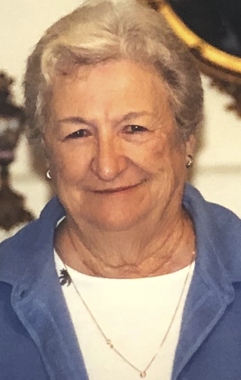 Back to Joann's story

Joann Banks Slauson, of Thornton, was called home to our Lord on Sunday, Jan. 5, 2020.
Born Oct. 17, 1939 to Dona and Ivan Banks. Joann was a precocious child. She adored working along side her father as he built houses and fixed roofs. It was evident from an early age that she loved the outdoors and this stayed with her all her life as she worked in her greenhouse and mowed her 80 acre farm.
She married Frederick C. T. Slauson in 1957 and raised five loving children who all inherited her independent mind and will.
Joann had a thirst for knowledge and learning from an early age. So, it was no surprise that she finished high school and went straight to college at Texas Tech University. With many subjects piquing her interest such as archaeology, engineering, and geology , she eventually settled on Education. She later earned her master's degree in Education and went on to become a highly successful and awarded principal in the Duncanville Independent School District. Joann's heart for children led her in all the years she worked in schools until she retired after a long career.
She was preceded in death by her parents, Dona and Ivan Banks, her brother, H. C. Banks, her husband, Frederick Slauson, and her son, Happy Slauson.
She is survived by her children, Charlise Boyer and her husband Richard, Bonnie Simon and her husband Mark, Rebecca Williams, and Michael Slauson and his wife Melinda; 10 grandchildren; six great-grandchildren; her sister Mary Lynn Banks Gorman and too many nieces, nephews, friends, and other loved ones to count.
A celebration of Joann's life is planned for 1 p.m. Sunday, Jan. 12 at Thornton United Methodist Church, 1302 Marshall, Thornton, Texas. Pastor Steve Nance will be officiating.
Instead of flowers, Joann would hope that you will do an unexpected and unsolicited act of kindness for another person. If you feel led to do more, you can make a donation to the church she loved so much, Thornton United Methodist Church, so that they can continue to do the charitable work that she was so proud to be a part of.
Please visit www.blair-stubbs.com to leave the family a message of condolence or sign the guest book.
Published on January 7, 2020
To send flowers to the family of Joann Slauson, please visit Tribute Store.

Send flowers
in memory of Joann

A place to share condolences and memories.
The guestbook expires on April 06, 2020.

Charlotte Casey
I taught at Alexander when Joann was a teacher also.. When Jerry Christensen left, Joann was named principal. I was so fortunate to be with her and always knew her fairness with teachers, students, and parents. Joann was always a great listener , and always listened to both sides of the problem. She would quietly think it through, and help solve the situation and problems involved. As a teacher, I always felt her support, and always admired her problem solving skills as an administrator.
View all