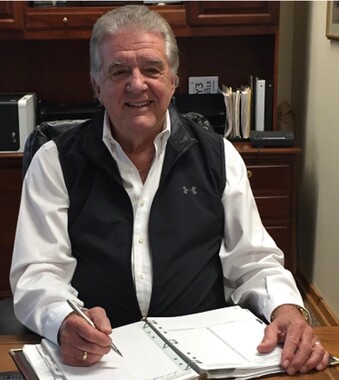 Back to Eddie's story

Eddie Walker peacefully transitioned into the arms of God on Wednesday, Nov. 20, 2019, at the age of 77.
Eddie was a most loving husband, father, brother, and true friend to countless people. He was affectionately known as Chief, H, and Dad.
Memorial Service: 10 a.m. Saturday at University Christian Church, Fort Worth.
Eddie was born and lived his early years in Corsicana, Texas. He was drawn into a career in the trucking business when, at the age of 6, he eagerly responded to his father's call, "Hey boy, crawl under here and hand me that wrench." That simple act started what would be a storied 71-year career in all aspects of trucking, transportation, sales, and much more.
Eddie took to work at a young age. He recalled doing all kinds of jobs at the grocery store, and many remember him always working, always helping, and being nice to everyone around him. And as some know, as an enterprising young man he had to wear cardboard covers over his little boy arms when delivering bread in order to not damage the loaves.
By the age of 20, Eddie and his father owned a fleet of 60 trucks hauling sand and gravel for the Texas Highway Department. As comfortable negotiating contracts with state officials and fleet owners as getting covered in grease helping a mechanic, his authenticity propelled him through many ventures, including Walker Chevrolet, Overland Coach, Frontier GMC, Dallas Peterbilt, Arrow Trucks, and Rush Truck Centers. Ultimately Eddie, his wife Dianne, and son Scott would create and run Best Used Trucks. They gained loyal customers across the United States, ranging from massive trucking companies to new independent owner-operators, all of whom regarded Eddie as a friend.
Eddie was a true visionary in his business, earning many awards including National Truck Professional of the Year, Small Business of the Year (Best Used Trucks). He left an indelible mark via the Used Truck Association - ultimately receiving its highest honor, the Marvin F. Gordon Lifetime Achievement Award. Eddie gave back along the way through innumerable acts of kindness big and small. He was a 32nd degree Mason and wore his ring, signifying such every single day of his life.
Eddie spent a lifetime vigorously embodying a work ethic like non-other. He was a craftsman of the highest order, ready to go to work with his hands literally anytime. Grandson of a carpenter, Eddie brought a genuine nature and tenacity that was expressed through what would become legendary love and kindness.
When Eddie met the love of his life, Dianne Schafer, the two would join families and begin a domestic legacy that would envelop scores of children (many not theirs), friends of their children, friends, and peers. Their home in Lake Country was a crossroad of activity holding a family of eight and expanded from time to time by those who needed a helping hand. Bedrooms were added, cars were purchased, and birthday parties welcomed a +1 always. Their home was forever a place to find acceptance, love, a nourishing meal, mind-blowing baked goods, and plentiful fun and laughter. When it came time for a family trip all were welcome. Simply bring your sleeping bag and line up row by row in the back of the suburban and settle in for a two-day drive to Medora, North Dakota.
Not surprisingly Eddie maintained a workshop in his home holding every tool imaginable, and then some. He was always eager to teach, to build, and share, which was simply a backdrop for love and togetherness. It didn't matter if you needed a part, a tool, or to fill up your first ever toolbox, the answer was always "yes". Eddie knew that when you built something together it created a bond. And his generous nature extended way beyond the home. He took his show on the road countless times across the country to help his extended family and friends. The energy and spirit were unmistakable, as a very young grandson learned early-on, bringing his broken toy truck wanting Eddie to "fix it, Chief."
Infused in all of Eddie's life was immeasurable heart. The twinkle in his eye when he was in the presence of his daughter, the devotion and care for his wife, a love so intense for all his clan that a tear was just below the surface at all times, are just a few examples that his craft was a ministry of love.
If Eddie were with us today, he would be enthusiastically telling stories that intertwined all our lives. He would be laughing, crying, and telling everyone he loved them, and he really did. Now his story is ours to tell.
Eddie was preceded in death by his parents, Henry Russell Walker and Lossy Lorene Walker; brother, Russell Eugene Walker; daughter, Debbie Walker; and son, Cody Minick.
Survivors: Wife, Dianne Schafer; sister, Joyce Rash and husband, Richard; children, Randy Walker and wife, Tammy, Cheyenne Minick, Scott Walker, Brandy Minick, and Concho Minick and wife, Dawn; and grandchildren, CJ Minick, Jackson Minick, Piper Minick, Grant Minick, Griffin Minick, and Bella Minick.
Memorials: The family has asked that in lieu of flowers please consider a donation to the Used Truck Association scholarship fund https://uta.org/the-jerome-nerman-family-educational-fund/
303 Corporate Center Dr. Suite 300A, Stockbridge, GA 30281.
Published on November 22, 2019
To plant a tree in memory of Eddie Walker, please visit Tribute Store.

Plant a tree in memory
of Eddie

A place to share condolences and memories.
The guestbook expires on February 19, 2020.

Robert Moreno
Eddie was a classmate of mine at Corsicana High School. He was a friend during ou school days and was always ready with a laugh and you could not feel anything but joy whenever he was around. I will always remember him as a dear friend and will miss him more than I can say. May God hold you in His loving arms and give you peace amigo,
Terry Hebron
Eddie Walker was the best of the best. I will miss him very much. Rest in peace Partner.
Wayne Adams
Eddie was a great man. He helped me start my trucking company. I would not have what I have today if Eddie had not helped me. He will truly be missed. Prayers to the family
View all