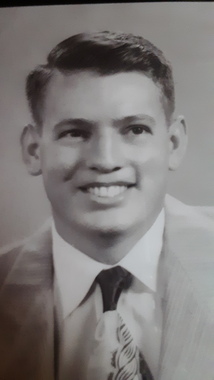 Back to David's story

David Van Pendleton was born Nov. 8, 1931 and passed away Nov. 22, 2019.
Memorial services to honor the life of David will be held at 2 p.m. Saturday, Dec. 14, 2019 at Naples First Baptist Church in Naples, Tx with Pastor Beau Stevens and the Gideons officiating.
David was born in Cisco, Tx, the son of Merle J. Pendleton, Sr. and Helen Strickland Pendleton. He graduated from Corsicana High School in 1949, where he met his wife-to-be of 68 years.
After high school, he attended Navarro Junior College before transferring to the University of Texas at Austin to study Geology.
Upon graduation, David worked in field geology before transitioning into a career in manufacturing, obtaining executive positions in multiple companies and earning universal respect from his colleagues and co-workers for his integrity and work ethic.
He was a devout Christian, and his faith was central to his life. He taught Sunday school for much of his life and served as a Deacon in multiple churches. He also contributed significant time volunteering for the Gideons, where he engaged in evangelical outreach efforts in the community and local prisons
In his spare time, David was an avid fisherman and occasional hunter. One of his favorite places for outdoor recreation was at his cabin on Lake Greeson in Arkansas. He was also a lifelong football fan who enjoyed rooting for the Dallas Cowboys and the Texas Longhorns but would watch just about any game.
In his later years, he enjoyed spending time with his wife, drinking coffee and taking in the scenery from his porch overlooking the Glass Club lake at Omaha.
David is survived by his wife, Zelma; sister, Joan Poarch; his son, Mark Pendleton and daughter, Alicia Ward; five grandchildren, Jordan, Zach and Lexi Pendleton, Rachel Blanton and Derrick Ward; two great grandchildren, Adeline and Henley Blanton and multiple nieces and nephews and many other dear friends and relatives.
He was uncommonly principled and generous man who always sought to care for those in need. His character was unmatched, and he will be deeply missed.
Published on December 12, 2019
To plant a tree in memory of David Pendleton, please visit Tribute Store.

Plant a tree in memory
of David

A place to share condolences and memories.
The guestbook expires on March 11, 2020.

Jack Rawson
To the family of David Pendleton, may the Good Lord bless and keep you upon the loss of your loved one.

Jack Rawson, a classmate of David And Joan
Ken Renfrow
Sorry for your loss. I have lots of good memories of times we spent together in years gone by.
View all