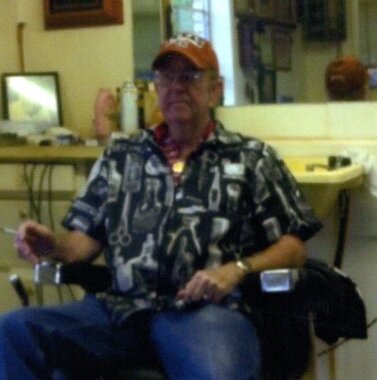 Back to David's story

David Dwane (Punchy) Dycus was born Dec. 16, 1940 in Corsicana and got called up to be with his beloved Linda on the morning of Jan. 5, 2020. David was proud that he lived most of his life in the town that he loved, Corsicana. You could always find him at Tiger Stadium on Friday nights. Many might know him from when he coached t-ball and midget league baseball. In fact, an entire generation of kids probably learned their first curse words from him. He loved coaching and mentoring children. He was an avid hunter and fisherman, and in his younger days, raised and hunted with bird dogs. Others probably know him from the social club that he ran on 13th, that also doubled as a barber shop. There was always fresh coffee at 6:30 a.m. in the morning for any and all that wanted to sit and shoot the bull.
When he wasn't at the barber shop, he could usually be found at the "office" which was basically any abandoned building where he and his friends could play dominoes. He had many passions, from his beloved Longhorns to just sitting out in front of the house and watching hummingbirds.
Punchy was a man of few words, but those words mattered. He lived his life on his own terms, and to him, a handshake meant it was a deal. He was always willing to help others, especially those in recovery. Punchy had many friends, because he was a good friend.
Punchy was preceded in death by his mother and father, Leroy and Eva Dycus, his brother Robert Earl Dycus, and the love of his life, Linda Beth Dycus.
He is survived by his sister Sue Garen; his three children, Kelli, Matthew, and Jennifer; four grandchildren, Chelsea Kuykendall, Caitlyn Kuykendall and fiancé Bryan Goforth, and Will and Rian Stubbs; his partner Charlotte Calloway; his granddaughters children and God children, Katlyon, Serenity, Emy Rae, and Layne.
Visitation will be held from 10 to 11 a.m. Thursday, Jan. 9, 2020 followed immediately by the service at the Griffin-Roughton Funeral Home with Brian Hopkins and Lewis Palos officiating.
Please come out and help us celebrate the life of this great man. Serving as pallbearers will be Jerod Welch, Blake Meredith, Bryan Goforth, Donnie Dean, Cody York and Will Stubbs.
Interment will follow at Hamilton Beeman Cemetery.
In lieu of flowers, donations can be made to the American Cancer Society.
We would like to thank the entire staff at Twilight Nursing Home for taking such good care of him.
An online guest book is available at www.griffin-roughton.com. Arrangements by Griffin-Roughton Funeral Home
Published on January 6, 2020
To send flowers to the family of David Dycus, please visit Tribute Store.

Send flowers
in memory of David

A place to share condolences and memories.
The guestbook expires on April 05, 2020.